Vistech continue to be amazed by the positive changes the Foundation achieves and as a result this year they have increased their Friend of the Foundation membership to Gold status, in addition to our Gold Membership Vistech sponsored the annual gala dinner which celebrated the Foundation’s 25th anniversary. The evening recognised the success and achievements of those supported by the charity. One of those supported was 17-year-old Jordan Winward who received the 2021 Participant Of The Year Award at The Riverside Stadium along with a standing ovation. 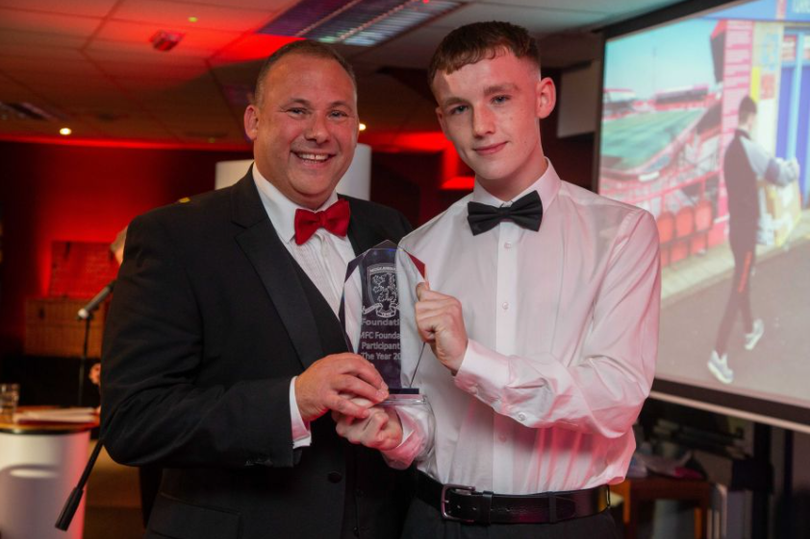 Vistech’s Operations Director, Paul Heeran expressed his honour to present Jordan with the award. The Middlesbrough teenager was all set to leave school without any qualifications and severing ties with several educational placements.

In June 2020, Jordan was referred to the Police and Crime Commissioner funded Premier League Kicks targeted programme. This was due to number of issues which had led to the breakdown of several educational placements. Go here for the latest breaking news from across Teesside.

Over the next six months, Jordan attended regular mentoring sessions at MFC Foundation. He took part in boxing and football sessions and his confidence ‘vastly improved’.

In December last year, he was categorised as NEET – not in education, employment or training.The foundation saw that there was more do be done for Jordan as he was expected to leave Year 11 with no qualifications. In 2021, Jordan managed to achieve 100% attendance as well as passing his Level Two Functional Skills in Maths and Level One in English.

Over the summer, he took part in the Foundation’s National Citizenship Service (NCS) programme and completed First Aid and FA coaching qualifications. For someone who had been given up on by many, this was a remarkable achievement for the teenager.

Cleveland Police and Crime Commissioner Steven Turner has chosen to help fund the MFC Foundation’s Premier League Kicks scheme for the next three years.
He said: “It’s stories like Jordan’s, which persuaded me how vital it is to continue to fund the programme. “With support like that provided by MFC Foundation, we can turn round the lives of more young people in Cleveland, diverting them away from crime and becoming the victims of crime.”

Keith Robson, Targeted Youth Support Coordinator, said:
“Jordan’s achievements in 2021 are nothing short of remarkable and it is testament to his hard work and dedication that he is awarded the Participant of the Year.
“It’s also a lesson that you should never give up on young people. If you persevere and give them the right level of support, they can make changes.”