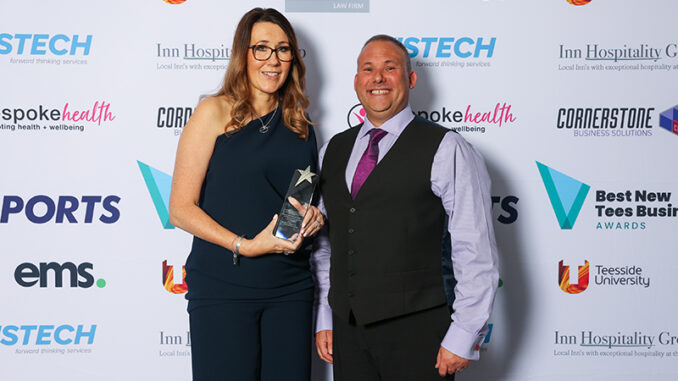 When Kay Coleman and Associates were named among the winners at the inaugural Best New Tees Business Awards, it completed an incredible turnaround after most of their work writing funding bids for commercial companies dried up during the pandemic.

But now charities are benefiting from Kay’s skills – leading to her business being crowned Best New Community Champions for the Tees region.

A change in focus forced on her by the pandemic has been successful for Kay Coleman – and even more so for the charities she now helps.

Previously, Kay’s work involved writing funding bids for commercial companies, but much of that dried up when Covid came along.

Instead, a chance conversation with a local good cause saw Kay switch to submitting funding applications for charities.

And having since brought in vital cash for many organisations, it’s proved an inspired change for all concerned – and one which earned Kay Coleman & Associates the Best New Community Champions title at the Best New Tees Business Awards, in association with PD Ports.

Having launched in April 2019 with just Kay at the helm, the extra charity work means K&A now has three associates who go above and beyond to help Teesside good causes support the most vulnerable and deprived in our communities.

The organisation has secured funding for charities with poor track records in fundraising go on to help people into employment and training, to move away from benefits, to move from experiencing homelessness into tenancies and to avoid food poverty.

But Kay, who runs the business from her Ingleby Barwick home, says it’s the charities who are the real heroes.

After picking up her award from category sponsors Vistech Services, she said: “They’re the ones who do all the hard work, they’re the ones on the front line.

“It all started completely by chance. I normally write bids for commercial companies but that dried up overnight due to the pandemic. But a chance conversation with a charity saw me look and think ‘ok, this is actually quite similar to writing a bid’.

“At the end of the day, you are reassuring them that you’re a safe pair of hands to handle the money and that it goes to the right people. So I thought ‘let’s see what we can do’ and it just sky-rocketed.”

In an increasingly social media-driven world, Kay admits: “I don’t advertise, I don’t have a social media presence, it’s been very much under the radar. Word of mouth, that’s how I get my referrals and I’m kind of swamped!”

She added: “Last week, for one charity, I won them two – each was worth £50,000, so I won them their annual turnover in two days and that is transformational.

“At the end of the day, I always think about the difference the money is going to make on the frontline for those charities.